Did you know that Mixed Martial Arts (MMA) is one of the most effective ways to get in shape, learn to defend yourself and gain confidence? Many people are intimidated by MMA because of what they see on television. But MMA is not just a sport for the most competitive, extreme fighters in the world. It is practiced by men and women, children and adults of all fitness levels and abilities everywhere, everyday.

Why? It is the fastest way to improve your physical fitness and transform your body. And like all martial arts, students also get the mental benefits that come from the emphasis on discipline, community and perseverance. SwiftKick Martial Arts San Diego has trained thousands of San Diego residents in our dynamic, functional Mixed Martial Arts programs. Combining all of the best elements from the major martial arts practiced today, SwiftKick students gain tactical self-defense skills and a deeper sense of self. And they have a ton of fun doing it! 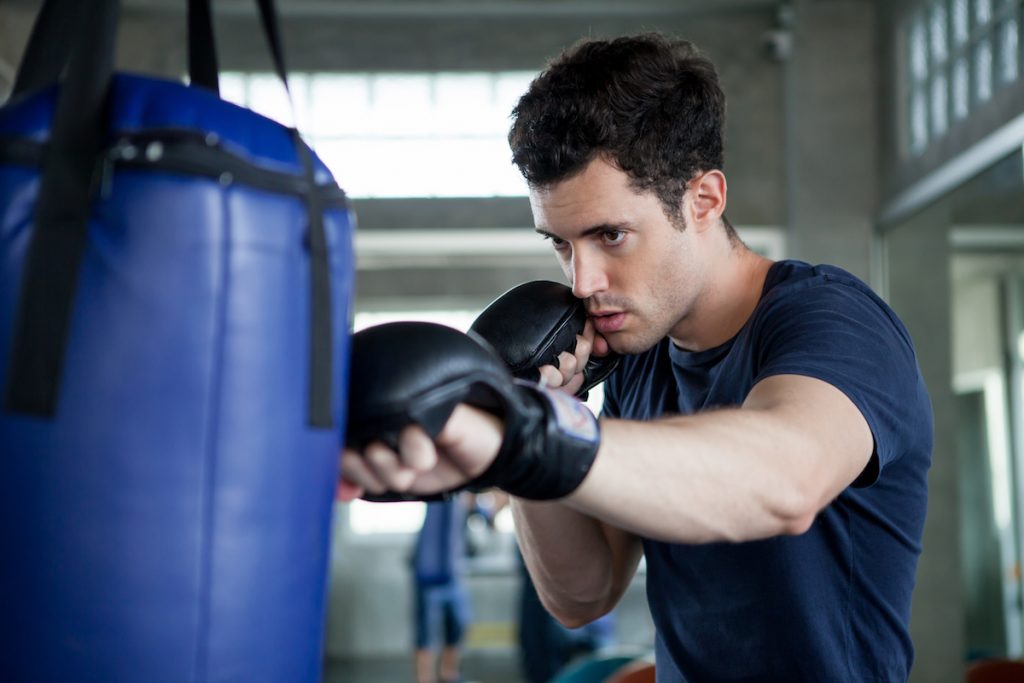 What is Mixed Martial Arts?

Although the term Mixed Martial Arts was first used in the early 1990s, precursors to the sport have been noted going back to ancient Greece, China, India and Japan. Mixed Martial Arts began to explode in popularity as the idea of finding the best fighter in the world started to take hold. Fighters from different disciplines of martial arts would combat each other to see which style was superior; later, fighters started to combine styles for a greater advantage against their opponents.

This search for the “perfect” form of martial arts created some memorable, high-profile fights, including the Muhammed Ali (boxer) match-up against Antonio Inoki (wrestler) in 1976, and the many popular bouts featuring the famous Brazilian Gracie family. Today, MMA has a large following and tremendous growth. You can find an MMA gym in most cities, from gyms that specialize in teaching basic skills and fitness, to professionally run programs that have a lineage for developing the best MMA fighters in the world.

What Styles of Martial Arts Will You Learn?

Mixed Martial Arts training gives students the skills and confidence to defend themselves no matter what situation they find themselves in or what kind of attack they face. From striking disciplines such as Karate, Boxing and Muay Thai, to ground skills such as American Wrestling and Brazilian Jiu Jitsu, MMA students gain a complete set of techniques to use safely and competently on the street.

SwiftKick Martial Arts San Diego teaches practical self-defense in a safe and encouraging environment. Students will learn grappling, submissions and ground work; striking; grabs, chokes; and weapons defense. Even if you are a beginner, SwiftKick instructors can teach you all of these skills and more so you can fight like a true champion.

At SwiftKick San Diego, our students learn a comprehensive, proven program of close combat self-defense that focuses on practical, functional techniques that can be learned and used competently by anyone. Used to train professional MMA fighters, law enforcement and various military agencies, the system is no-nonsense while still approachable for everyday athletes. Our MMA program blends elements from stand-up, clinch and ground martial arts including:

SwiftKick Martial Arts San Diego teaches more than just fighting skills. At SwiftKick, our programs combine multiple forms of martial arts to give you the skills you need to be prepared for any situation that may require you to defend yourself. More than that, we are focused on teaching Mixed Martial Arts skills that can be used if needed the moment you leave our studio. Students learn at their own levels, in a safe environment that is unlike some of the more competitive, aggressive MMA gyms out there today.

What are your goals?

Mixed Martial Arts training at SwiftKick will help you push beyond your limits and reach your full potential. Students agree that the benefits of martial arts training extend far beyond the studio – they see meaningful and positive changes in the way they live. Many find the discipline and motivation to adopt an overall healthier lifestyle. Others see huge improvements in their ability to focus at work and keep up with their children. Even parents notice that their children perform better at home and school.

Whether you are looking to get in shape, lose weight or gain more confidence in your ability to defend yourself and your family, martial arts are the most effective way to achieve all of your goals. Our Mixed Martial Arts approach will give you the best workout you’ve ever had while giving you the tools you need to fiercely defend yourself.

I was in Bernado class for almost 6 months. Sadly, because of work reason, I have to move. I have learned a lot from SwiftKick. I came in as a kickboxing background student and came out as a martial arts student. I have learned more defense skills, move technique, and kick skills. If I can stay longer, I believe I can learn more skills. All instructors are very nice and reachable. For adult class, your classmates are great instructor, too.read more

Ziyue Jin
22:53 11 Mar 19
We are so happy we signed our Liam up with Swiftkick Marital Arts in RB. We started 2 months ago with our 9yr old and he has made such great progress and actually loves going 3 times a week. If he is in a bad mood going he comes out of there super happy. He smiles through the whole class. We just signed up our 7 year old this weekend and he is so far loving it also. The staff are absolutely amazing with the kids.read more

The crazy Kehles Epic lifestyle
17:44 28 Oct 18
We are so grateful that we found Swiftkick Martial Arts. We were introduced by the after school program they offered on our schools campus. After just 7 weeks of training, through that program, we already saw a difference in our children’s behavior, attitudes and confidence. We knew we needed to continue. We appreciate the flexibility of the program and the great leadership offered by the coaches in each class. We now have all three of our kids in the program. We feel good about investing into their health, their character and their safety.read more

JYNELL SCHMALFELDT
16:59 20 Mar 18
My son has been practicing at SwiftKick Martial Arts for about two years. We have been nothing but pleased with the level of instruction, the professionalism of the teachers and staff, and the difference it has made in our son's life. We love how there are always many instructors available to help a child, give them a little motivation, or keep them focused. The teachers know all of the kids, by name, and they engage them personally by knowing who they are and what they are interested in. One thing I remember from our first day, was that Mr. Smith knew that my child was new, he knew his name and he welcomed him. That little personal touch can make an uneasy child more comfortable, that little thing, has stayed with me all this time and I think it is what makes SwiftKick so special.read more

Janice Takade
23:41 11 Feb 18
My 5 year old and 8 year old started at SwiftKick about a year ago and have loved it. I have watched them become more focused, gain strength and coordination and have fun doing it! About 9 months ago, my husband and I decided to join. I have become more confident and love the fact that I am getting great exercise and learning important self defense skills. There are plenty of class times to choose from throughout the week and all of the instructors are knowledgeable and kind. I would highly recommend SwiftKick for the entire family!read more

Kelly Tognetti
01:15 22 Aug 17
My son loves Swiftkick at Rancho Bernardo. When our summer travel plans got cancelled he was happy cause he won’t be missing Swiftkick!! I noticed an increased level of discipline and alertness in him. Sometimes when I call out to him or assign a task at home he replies “ yes mom”. 😀 Thank you Swiftkick.read more

Jan S
16:30 20 Jun 19
Four of our children have trained here over the last 3 1/2 years. The coaches are excellent at engaging younger and older students alike. We count this as a valuable piece of our children's education.

Erin Nave
16:50 16 Jul 19
Our oldest daughter has been a part of Swiftkick for 4 years and she loves it. It has given her tons of confidence and let her grow as a leader. The coaches definitely engage with our kids and take an individualized approach with teaching them. While our kids have grown and have a great time there, if there is one thing that they can improve upon, it's that having more classes especially at the more advanced level would be awesome!read more

Leng Ky
14:11 18 Jul 19
My son has been a student at SwiftKick for over 10 years. The awesome thing about SwiftKick Martial Arts is while they teach self-defense, they also teach self-control. The entire staff are incredibly patient, and mix in fun activities to get students (adult and children alike) to be active, learn self-control, and have a ton of fun doing it. A few years ago, after seeing how much fun our son was having, my wife and I also started and have been loving it ever since!read more

Scott Kraetsch
22:51 08 Aug 19
Our family loves SwiftKick! We have been going to SwiftKick for two years and we have loved every class and event. My daughter is excited to go to each class and is disappointed if we ever have to miss. All the coaches are engaging and very knowledgeable. They teach life skills like self-defense, respect, attentiveness and self-control in a fun way. Our younger son is excited to start training at the Rancho Bernardo studio and he'll start as soon as he is old enough.read more

Fouad Alshayeb
19:51 18 Jan 20
SwiftKick is a great place to train. My entire family takes classes here and cannot get enough. They offer great instruction that is fun for all ages and keeps us coming back for more. We pay one price and can come as many times a week as we'd like. The owner is a great guy and is very passionate about what he does.read more

M Conrad
03:33 29 Jun 17
Swiftkick Martial Arts is a great place to work out and train a self-defense class! I love the staff and the materials they teach, check them out for a free trial if you're interested!