The value of martial arts training goes far beyond the ability to defend yourself from a physical attack. Students of any style of martial arts learn life skills such as discipline, respect, self-reliance, cooperation and perseverance. These skills translate to greater success both in and out of the studio.

Tae Kwon Do is a form of martial arts that has existed for more than 2000 years. From its origins in Korea, Tae Kwon Do was brought to the United States in the 1950s and has continued to spread ever since, becoming one of the most widely practiced forms of martial arts in the world. The popularity of Tae Kwon Do was so great that it even became an official Olympic sport at the Sydney Olympic Games in 2000. 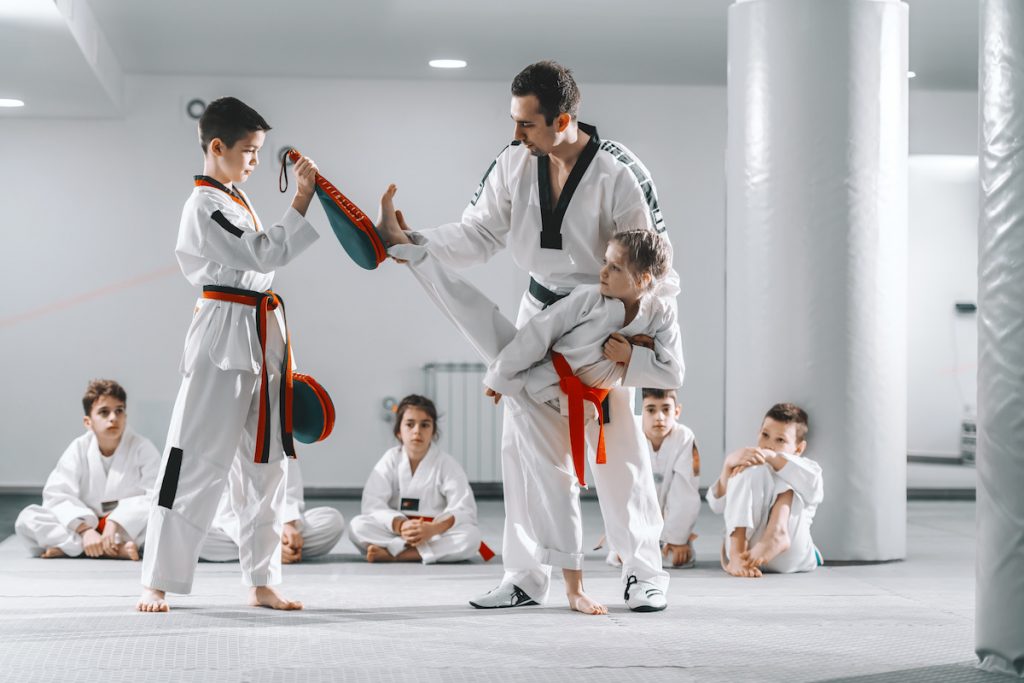 Compared to other martial arts disciplines, Tae Kwon Do emphasizes kicking techniques more than hand strikes or ground fighting. Because of this, students make amazing gains in their flexibility, balance and overall agility. Although more focused on foot techniques, Tae Kwon Do also incorporates hand punches, blocks and strikes to effectively combat an opponent. Training often includes a series of basic stances, followed by precise movements known as forms and controlled sparring exercises.

The Guiding Principles of Tae Kwon Do

Although it provides a very powerful system for self-defense, Tae Kwon Do focuses heavily on a specific set of tenets that provide a framework for training the mind. These tenets include: Courtesy, Integrity, Perseverance, Self-Control and Indomitable Spirit.

The “Tae Kwon Do Student Oath” is typically repeated at the start of each class to remind students of their commitments to themselves, their classmates and their community.

How are Tae Kwon Do and Karate Different?

Many people often mistake Tae Kwon Do for Karate, and vice versa. Both martial arts provide an effective system for developing the physical and mental strength required to defend against an attack or other threat. However, there are some key differences between the two styles.

Despite their differences, traditional martial arts like Karate and Tae Kwon Do, reality based self-defense programs like Krav Maga and Mixed Martial Arts all provide similar benefits for the bodies and minds of their students. Some of the top reasons why martial arts training is superior to some other forms of recreation include:

SwiftKick Martial Arts Carlsbad takes a different approach to martial arts and self-defense training than many other schools in the San Diego area. We want our students to learn how to use a variety of martial arts techniques in a functional, practical way. Using a unique holistic approach, our experienced instructors give students the tools to be prepared for real world threats like muggings, assaults and other violent attacks.

Rather than concentrating on a single style of martial arts, SwiftKick Martial Arts Carlsbad provides a dynamic curriculum that combines techniques from Boxing, Kickboxing, Jiu Jitsu, Wrestling, Krav Maga, Karate and more. Students will learn essential skills in stand-up, clinch and ground martial arts so they have a variety of tactics to use in the event of an attack.

Our Applied Martial Arts programs give students the skills they need to physically defeat an opponent in the real world. But we do so much more than that. At SwiftKick Carlsbad, we show our students how to apply critical life skills such as courtesy, respect, attentiveness and cooperation in their everyday lives, no matter if they attend elementary school or if they run a Fortune 500 company.

If you want more than just a gym, explore the functional mixed martial arts and combat self-defense programs at SwiftKick Martial Arts Carlsbad. We proudly serve Carlsbad and the surrounding areas by providing the most effective, practical and comprehensive martial arts training available. Not only will you achieve success on and off the mat, but you will enjoy the supportive and fun environment that we create for all of our students.

Contact SwiftKick Martial Arts Carlsbad today to learn more about how you can start to live the martial arts lifestyle.

I was in Bernado class for almost 6 months. Sadly, because of work reason, I have to move. I have learned a lot from SwiftKick. I came in as a kickboxing background student and came out as a martial arts student. I have learned more defense skills, move technique, and kick skills. If I can stay longer, I believe I can learn more skills. All instructors are very nice and reachable. For adult class, your classmates are great instructor, too.read more

Ziyue Jin
22:53 11 Mar 19
We are so happy we signed our Liam up with Swiftkick Marital Arts in RB. We started 2 months ago with our 9yr old and he has made such great progress and actually loves going 3 times a week. If he is in a bad mood going he comes out of there super happy. He smiles through the whole class. We just signed up our 7 year old this weekend and he is so far loving it also. The staff are absolutely amazing with the kids.read more

The crazy Kehles Epic lifestyle
17:44 28 Oct 18
We are so grateful that we found Swiftkick Martial Arts. We were introduced by the after school program they offered on our schools campus. After just 7 weeks of training, through that program, we already saw a difference in our children’s behavior, attitudes and confidence. We knew we needed to continue. We appreciate the flexibility of the program and the great leadership offered by the coaches in each class. We now have all three of our kids in the program. We feel good about investing into their health, their character and their safety.read more

JYNELL SCHMALFELDT
16:59 20 Mar 18
My son has been practicing at SwiftKick Martial Arts for about two years. We have been nothing but pleased with the level of instruction, the professionalism of the teachers and staff, and the difference it has made in our son's life. We love how there are always many instructors available to help a child, give them a little motivation, or keep them focused. The teachers know all of the kids, by name, and they engage them personally by knowing who they are and what they are interested in. One thing I remember from our first day, was that Mr. Smith knew that my child was new, he knew his name and he welcomed him. That little personal touch can make an uneasy child more comfortable, that little thing, has stayed with me all this time and I think it is what makes SwiftKick so special.read more

Janice Takade
23:41 11 Feb 18
My 5 year old and 8 year old started at SwiftKick about a year ago and have loved it. I have watched them become more focused, gain strength and coordination and have fun doing it! About 9 months ago, my husband and I decided to join. I have become more confident and love the fact that I am getting great exercise and learning important self defense skills. There are plenty of class times to choose from throughout the week and all of the instructors are knowledgeable and kind. I would highly recommend SwiftKick for the entire family!read more

Kelly Tognetti
01:15 22 Aug 17
My son loves Swiftkick at Rancho Bernardo. When our summer travel plans got cancelled he was happy cause he won’t be missing Swiftkick!! I noticed an increased level of discipline and alertness in him. Sometimes when I call out to him or assign a task at home he replies “ yes mom”. 😀 Thank you Swiftkick.read more

Jan S
16:30 20 Jun 19
Four of our children have trained here over the last 3 1/2 years. The coaches are excellent at engaging younger and older students alike. We count this as a valuable piece of our children's education.

Erin Nave
16:50 16 Jul 19
Our oldest daughter has been a part of Swiftkick for 4 years and she loves it. It has given her tons of confidence and let her grow as a leader. The coaches definitely engage with our kids and take an individualized approach with teaching them. While our kids have grown and have a great time there, if there is one thing that they can improve upon, it's that having more classes especially at the more advanced level would be awesome!read more

Leng Ky
14:11 18 Jul 19
My son has been a student at SwiftKick for over 10 years. The awesome thing about SwiftKick Martial Arts is while they teach self-defense, they also teach self-control. The entire staff are incredibly patient, and mix in fun activities to get students (adult and children alike) to be active, learn self-control, and have a ton of fun doing it. A few years ago, after seeing how much fun our son was having, my wife and I also started and have been loving it ever since!read more

Scott Kraetsch
22:51 08 Aug 19
Our family loves SwiftKick! We have been going to SwiftKick for two years and we have loved every class and event. My daughter is excited to go to each class and is disappointed if we ever have to miss. All the coaches are engaging and very knowledgeable. They teach life skills like self-defense, respect, attentiveness and self-control in a fun way. Our younger son is excited to start training at the Rancho Bernardo studio and he'll start as soon as he is old enough.read more

Fouad Alshayeb
19:51 18 Jan 20
SwiftKick is a great place to train. My entire family takes classes here and cannot get enough. They offer great instruction that is fun for all ages and keeps us coming back for more. We pay one price and can come as many times a week as we'd like. The owner is a great guy and is very passionate about what he does.read more

M Conrad
03:33 29 Jun 17
Swiftkick Martial Arts is a great place to work out and train a self-defense class! I love the staff and the materials they teach, check them out for a free trial if you're interested!